Can Lewis Hamilton seal his sixth World Championship in the buzz of Mexico City?

The Briton is within touching distance of becoming the second most decorated driver in Formula 1 history – and one more title away from equalling Michael Schumacher’s coveted record of seven.

Mercedes team-mate Valtteri Bottas is the only man who can now – mathematically speaking – stand in his way. But with a 64-point lead despite Bottas taking victory at the Japanese Grand Prix, the odds are good for another championship fiesta this weekend.

“Everything’s possible,” Bottas said after his first win since Baku in April. “Although I’m realistic as well that I will need to be very lucky, that’s a fact, to win all the rest of the races.”

If things don’t go to plan and Hamilton finishes outside the top four in Mexico, the title race would then move on to the United States Grand Prix in early November.

The 34-year-old isn’t exactly brimming with confidence about the weekend: “Mexico is generally our Achilles heel – probably our worst race of the year,” Hamilton said after his third-place finish at Suzuka.

“The last few have been pretty shocking, even though we’ve won the title there.”

The Mexican Grand Prix made its first F1 championship appearance in 1963, at the Autodromo Hermanos Rodriguez circuit named in honour of Mexico’s most famous racing brothers, Ricardo and Pedro Rodriguez.

Returning in the modern era meant a revamp to the original 1959 track layout, and with it the infamous and ultra-fast banked right-hander, Peraltada, was given a makeover to improve safety. The fearsome 180-degree corner was cut in half to instead twist its way through the old Foro Sol baseball stadium at the end of the lap.

In the summer it was announced the Mexican Grand Prix will continue to be held in Mexico City until at least the end of 2022.

With 1.3 million spectators attending the event in the four years since its return, the presence of F1 has become an important factor in the city’s economic growth.

As the race coincides with the Mexican festival of the Day of the Dead, the fixture has become a riot of brightly coloured sugar skulls, elaborate flower crowns and a buzzing carnival atmosphere.

If you’re a local boy, expect the decibel level of the crowd to rise even more, as Racing Point’s Sergio Perez can confirm.

“Racing in Mexico is the highlight of the season for me,” Perez said. “When I see the busy grandstands, I feel very proud and the support from the people is fantastic.”

For Daniel Ricciardo, it’s the musical entertainment that makes the Mexican paddock so entertaining. “I love that they have Mariachi bands everywhere,” says the Australian. 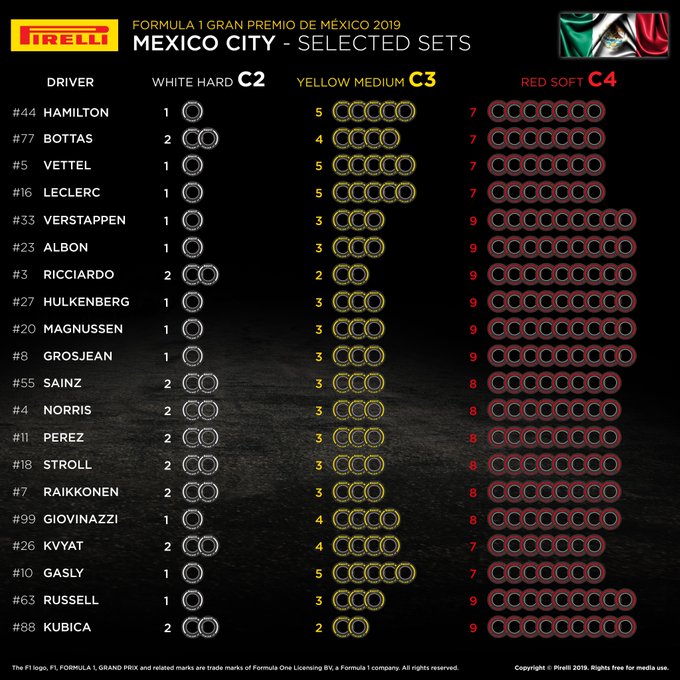 What’s the form guide for Mexico?

As Mercedes have already wrapped up a record sixth straight constructors’ championship, it’s left to Hamilton to complete the Silver Arrows celebrations.

This could be the third straight year he seals the title at the Autodromo Hermanos Rodriguez but two things missing from those championship-winning years in Mexico have been pole positions and chequered flags.

Last year, Max Verstappen joined the small list of double winners at the circuit – no driver has more than two victories here – when the Dutchman eased to victory from second on the grid, taking advantage of Red Bull team-mate and pole-sitter Ricciardo’s poor start.

A year earlier, the 22-year-old was once again on the front row, in second spot, this time alongside the Ferrari of Sebastian Vettel.

Verstappen dominated from the front after taking the lead at the first corner, a move that led to a collision between Hamilton and then title rival Vettel.

As Verstappen looks to secure a treble this weekend in Mexico (and a first victory since the German Grand Prix in July), he too could potentially be scuppered by his own team-mate.

Alexander Albon finished a career-high fourth in Japan and excelled in qualifying by matching the Dutchman’s lap time in qualifying on his first experience of the Suzuka track.

BBC Sport has live coverage of practice, qualifying and the race, across the website and BBC Radio 5 Live. There will be live digital coverage on the BBC Sport website and app – including audience interaction, expert analysis, debate, features, interviews and audio content.

You can follow all the action and the latest news on the BBC Sport F1 page and via the BBC Sport app, and catch up with analysis and interviews with the BBC Radio 5 Live Chequered Flag podcast.