Bayern Munich get the Bundesliga season under way on Friday against Schalke as Robert Lewandowski bids to build on one of the greatest seasons ever.

The Pole made history as Bayern Munich won the Treble, and he won the Golden Boot in all three competitions, with a remarkable 55 goals in 47 games.

It was a season which lasted so long that he started it as a 30-year-old and was 32 by the time it finished. Bayern’s Bundesliga campaign starts 26 days after their Champions League final win over Paris St-Germain.

But he will not be winning the Ballon d’Or, football’s top individual prize. Organisers France Football are not awarding it for the first time since 1956 because of the coronavirus pause, saying there was a “lack of a sufficiently level playing field”.

The ceremony for the Fifa Best Awards – which are slightly less prestigious – was also cancelled, although Bayern chairman Karl-Heinz Rummenigge says Fifa will still be handing out an award to the world’s best player.

“To win the Ballon d’Or is a dream for every player,” he said. “I think every player who won what we won or scored so many goals should maybe win this Ballon d’Or.”

It would be hard to argue against him. 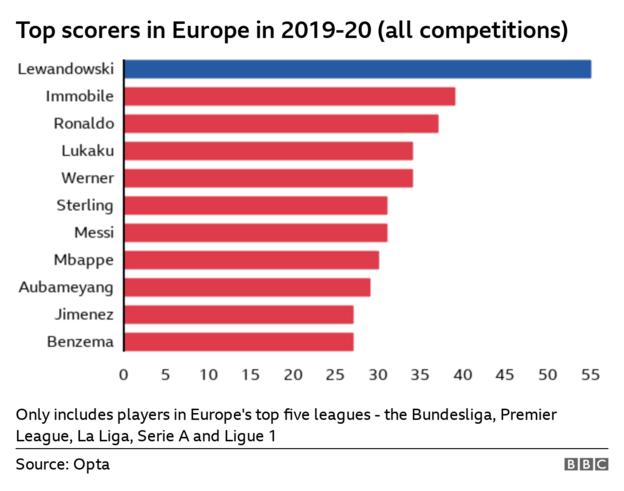 Lewandowski scored 16 goals more than any other player in Europe’s top five leagues across all competitions in 2019-20, as he was top scorer in the Champions League, Bundesliga and German Cup.

His 55 goals were 18 more than Cristiano Ronaldo managed for Juventus and 24 more than Lionel Messi at Barcelona.

He scored a remarkable 15 Champions League goals in his first nine games this season (only failing to score in the final). Only Ronaldo (11 games between June 2017 and April 2018) has ever scored in more consecutive European Cup games.

Lewandowski’s season ended with a clean sweep of major trophies and on a run of 21 consecutive wins, with 55 goals and nine assists in 46 games.

He scored a goal an average of once every 75 minutes – and had a hand in one every 64 minutes.

The 32-year-old also led Poland to Euro 2020 (which has been delayed until next year), with four goals and two assists in six qualifiers in 2019-20.

However, he missed out on the European Golden Shoe – for the top league scorer in the continent – to Lazio’s Ciro Immobile. Lewandowski bagged 34 goals in 31 league games, with Immobile managing 36 in 37.

Lewandowski has been prolific since moving to Germany and Borussia Dortmund in 2010 but 2019-20 was by far and away his best scoring season.

His four best campaigns until now were his previous four, with excellent consistency bringing him 42, 43, 41 and 40 goals.

Before the Champions League final, he told BBC Radio 5 Live: “Lewandowski has been amazing for a good part of a decade but this year he has gone up another level. It seems cruel not to have the Ballon d’Or this year.”

How does Lewandowski compare to previous winners?

Barcelona’s Lionel Messi has won six of the past 12 Ballons d’Or, with Ronaldo claiming five during his time at Manchester United and Real Madrid, while Real’s Luka Modric won the other. 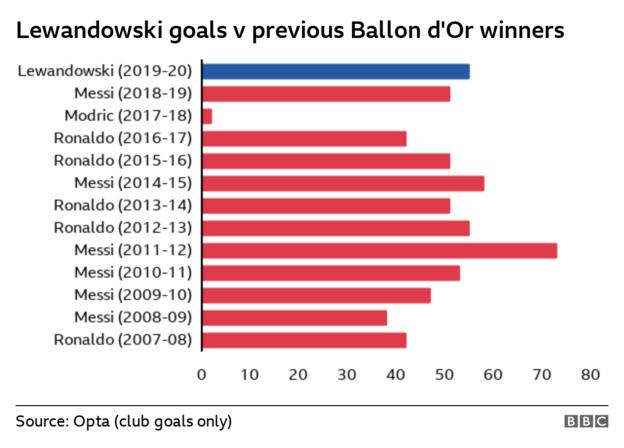 That ended two years ago with midfielder Modric winning after a Champions League final success and Croatia’s run to the 2018 World Cup final.

Lewandowski’s chances of winning would have been enhanced by the fact he’s a striker – winners are usually forwards or creative midfielders and, more often than not, win the Champions League.

The last defender to win was Italy captain Fabio Cannavaro in 2006 after lifting the World Cup.

Since then, nine of the 13 winners (well, four names – Kaka, Ronaldo, Messi and Modric) have won the Champions League that season.

The last Bundesliga player to win was Borussia Dortmund’s Matthias Sammer in 1996. – bbc.com